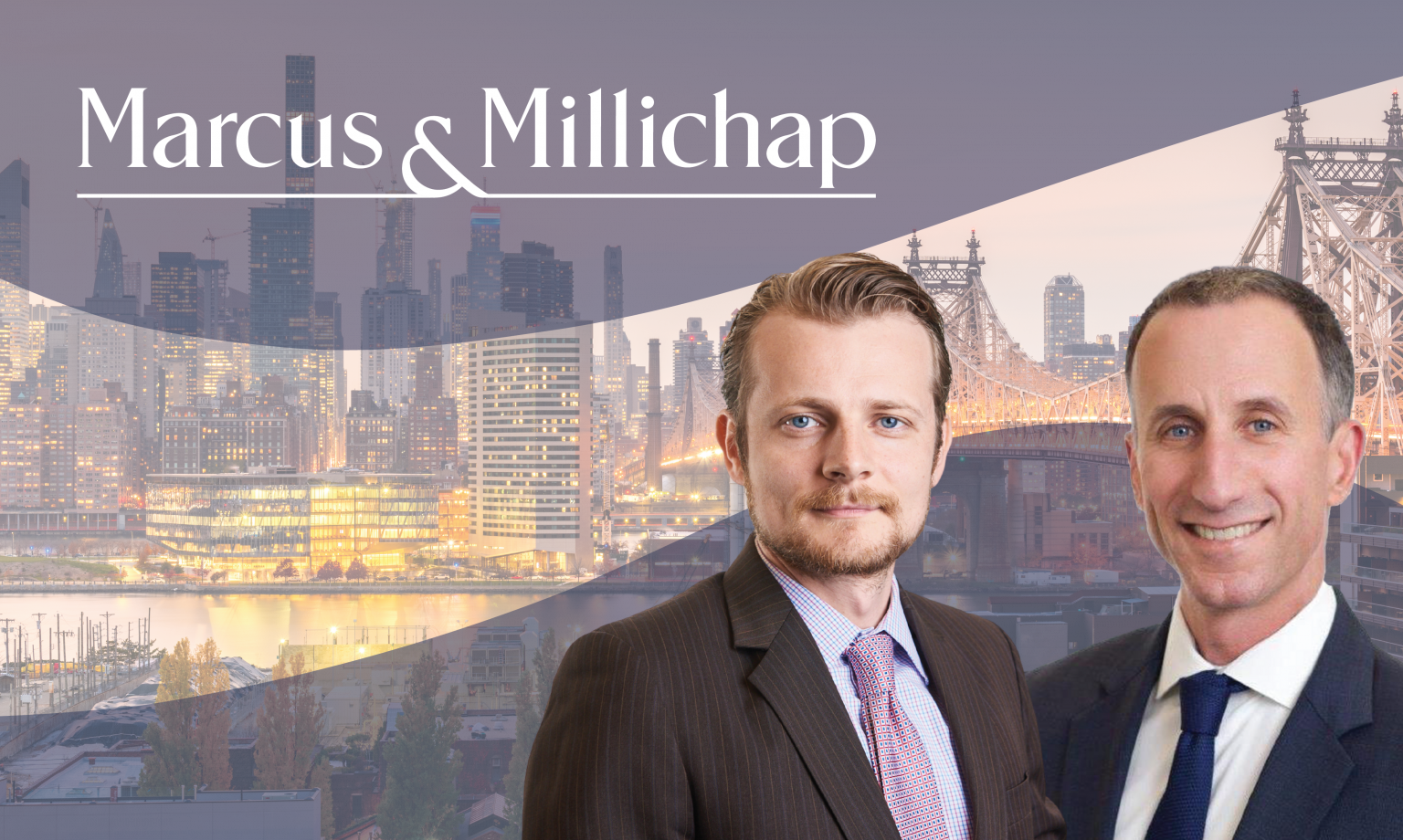 Most investors considering prime New York real estate likely think of gleaming office towers, swanky apartment buildings, and luxury retail space. But there’s another sector that’s exploding with no slowdown in sight: industrial property, which is currently in hot demand all around the greater New York City area. In fact, Real Capital Analytics ranks industrial property as the second-most popular type of commercial property (after rental apartments) nationwide, with $166.1 billion in 2021 sales, up 56% from 2020.

People who weren’t in the market during the height of the pandemic are now desperate to get in, says Jakub Nowak, an industrial specialist and team lead at The Nowak Group of Marcus & Millichap.

“The sentiment I would use to describe demand by both the investment community and owner/users is FOMO or ‘fear of missing out.’ 2021 was a banner year for industrial property sales, with a lot of players who had been sitting on the sidelines during 2020 wanting to get back into the market, and we expect that trend to continue.”

“Industrial” can mean different things, and within New York City’s urban core, Nowak considers the category to include a larger universe that expands beyond just your typical single-story warehouse. For example, he says that while many multi-story facilities built in the first half of the century have transitioned to offices, they are still located in traditionally industrial areas,  and many function with a fusion of uses, where some might be traditional warehousing, while  the rest might be creative, maker, or storage space. Studio space dedicated to the city’s burgeoning movie and TV production studios is also included. In fact, the sector includes the largest industrial sale of 2021: the purchase of Kaufman Astoria Studios by a joint venture between Hackman Capital Partners and Square Mile Capital for $600 million.

Based on his more expansive definition, he pegs the 2021 sales of industrial property throughout the boroughs at $3.5 billion.

He also quantifies two distinct markets: The vast majority of winning bids to purchase industrial property under 30,000 square feet come from owner/operators, such as distributors, import/exporters, contractors, and other businesses that require an industrial footprint within the city’s limits and prefer to own rather than rent; while properties over that threshold mostly sell to professional or institutional investors with an eye toward adding value by capitalizing on soaring industrial rents or redevelopment. Notable examples include Centerpoint Properties’ purchase of two Bronx properties anchored by Amazon: 1080 Leggett Avenue, a 145,000 square foot Amazon Fresh facility which sold for $116.5 million; and 511 Barry Street, a last-mile facility that sold for $119 million, along with Realterm Logistics’ purchase of a Brooklyn truck terminal at 523 Gardner Avenue for $70,000,000.

While low-interest rates are helping spur interest, demand is being driven by several hot sectors, headlined by the jump in space demand from eCommerce, along with ghost kitchens and auxiliary businesses and subcontractors. “There is an insatiable need for new eCommerce space, especially as it relates to last-mile delivery and quickly reaching consumers in the New York City boroughs,” Nowak says “Fierce competition within the sector has resulted in expected delivery times to be measured in hours, not days, driving demand for fulfillment centers located within minutes of high-density residential areas.”  He also saw a surge in demand for land for parking facilities, often purchased opportunistically by investors who intend to hold the property and realize future value rather than engage in immediate development.

Finally, the ongoing supply chain disruption has created extensive near-term demand for inventory storage as businesses look for space to store goods locally to hedge against delays along the supply chain. “The market is betting you can fill vacant space immediately and when existing logistics challenges subside, demand for eCommerce fulfillment will quickly absorb new availability,” Nowak explains.

Compounding the space squeeze is the fact that this growing demand wasn’t met by commensurate new development completions, with minimal new inventory built due to construction delays resulting from the Covid-19 lockdown and surging building supply and labor costs. The “New York City Industrial Market Overview and Outlook” prepared by Marcus & Millichap Research Services showed completions plummeting to a mere 151,000 square feet in 2021, with a predicted rebound to 2,230,000 square feet in 2022.

The Elements of Ideal Industrial Space

Whether they are using it themselves as owners or they are investors looking for attractive opportunities that will appeal to tenants, the requirements used to evaluate functional industrial space are the same. Nowak sees large land parcels over 100,000 square feet in the highest demand by far from industrial developers because they allow one to build a multi-story building with space for ramps large enough to accommodate 53-foot container trucks servicing a facilities’ upper levels.

Other enticing elements include outdoor lot space for parking and maneuvering deliveries, elevated loading docks that can easily dock containers, and high ceilings that offer the ability to vertically stack goods. Another key asset is a lack of interior columns, which allows maneuverability within a space.

And of course, access to major truck routes is vital, along with properties situated in areas with little to no traffic. Nowak says the city has largely already taken these geographic elements into consideration when designating its Industrial Business Zones (IBZ), mentioning popular areas like Sunset Park, Red Hook, East Williamsburg, Jamaica, and many parts of the Bronx and Queens, to name a few.

A Strong Market Ahead

The factors that are leading to today’s surging demand are not expected to abate, and Nowak predicts 2022 will bring more of the same. Ecommerce will continue to lead the way; while he doesn’t expect to see the same growth trajectory from the last two years, for many shoppers who made online purchases for the first time during the pandemic, shopping online has become a  habit that’s here to stay. “As a firm, we remain extremely bullish on the industrial market, both locally, regionally, and nationally.  Our industrial business continues to grow, driven by market factors of course, but more due to the consistent focus of our agents who specialize in the industrial sector,” said John Horowitz, First VP & Division Manager – Northeast for Marcus & Millichap.

“Add in related challenges, such as the current supply chain disruptions and ongoing headaches regarding last-mile delivery, and it’s easy to grasp the appeal of warehouses and other related industrial properties,” Nowak said. He sees more opportunities in the rise in completions that will bring more inventory to market; in particular, he expects to see more multi-story facilities being built that will cater directly to eCommerce and last-mile delivery.

“Based on the current economic conditions, our research team projects vacancies to shrink from 6.1% in 2020 to 4.7% in 2022.  In New York, that number should be even lower,” said Horowitz.

Nowak views the biggest constraint as a lack of opportunity. “There’s just not enough sites to go around with a large enough scale to accommodate the development of modern last-mile facilities. As a result, there is a tremendous amount of competition around opportunities when they come up.”

Of course, conditions can change quickly, and the industry is paying close attention to how New York City Mayor Eric Adams and his administration will address zoning questions and to what degree new zoning ordinances will continue to allow for the development of last-mile facilities within the city’s urban core and Industrial Business Zones.

In addition, Horowitz encourages investors to monitor potential interest rate hikes. “The Fed has a balancing act ahead as they are trying to curtail inflation, while not derailing the economy,” Horowitz says. It’s top of mind for both buyers who are eager to lock in low rates while they last, and sellers looking to sell before rates have an impact on purchase prices.

Potentially higher near-term inflation is also making investors more cognizant of lease terms, Nowak notes. “Traditionally real estate is a fantastic hedge against inflation, and over time should keep up – but only if lease terms allow,” he says, adding that now is the time to reset terms so that escalation clauses keep pace with higher rates.  On that note, investors should also be aware of how sensitive a specific business model is to inflation, citing a recent food distribution facility they listed, where one of the main selling points was its ability to continue to perform despite the economic environment. “Those are the kind of tenants that investors are keen on having.”

All in all, the outlook is bright, Nowak confirms. “Sellers have decided now is the time to transact, relative to where the market has been over the past 10 years, and buyers are eager to gobble up inventory.”