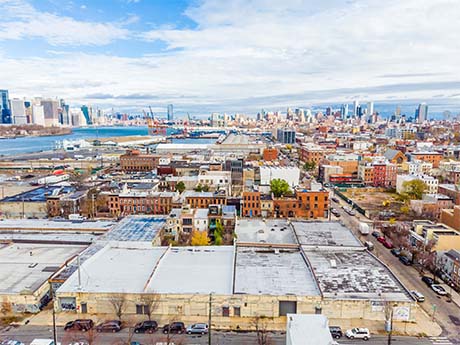 Although dollar volume for outright industrial sales transactions over $1 million fell by almost 25 percent from $1.75 billion in 2019 to $1.35 billion in 2020, the average price per square foot over the same period held flat at about $445 per square foot. Meanwhile, capitalization rates for industrial properties in 2020 continued their steady downward trajectory, compressing further from 4.7 to 4.4 percent on a year-over-year basis.

Importantly, these 2020 sales numbers do not account for the $800 million-plus of institutional capital that poured into local industrial real estate by way of partial interest sales.

The pandemic’s impact on the industrial sector becomes considerably more visible when looking at the New York City metro area leasing numbers. Move-ins dropped by 16 percent from 4.3 million square feet in 2019 to 3.6 million square feet in 2020. The vacancy rate grew from 4.6 percent to 6.1 percent while average asking rents dropped from $23 to $22 per square foot over the same period.

However, the decline in leasing activity pales in comparison to the impact the pandemic had on the office and retail markets. New York City’s industrial assets benefitted, in part, from a surge in demand for online sales. Amazon alone accounted for 750,000 square feet of leases signed in 2020 between two new facilities in Staten Island and Queens.

In addition, most warehousing, logistics, construction and manufacturing businesses enjoyed essential services status and were allowed to operate through the 2020 business shutdown, sparing the sector from the financial hardship and wave of bankruptcies seen in other parts of the market.

As we move through 2021, e-commerce will continue to be the most overt driver on the industrial market’s demand side. Online retail as a share of total U.S. retail sales surged from about 16 percent in 2019 to almost 23 percent during the height of the pandemic as consumers shifted from indoor to digital shopping.

The shift in consumer behavior has been habit-forming, indicating that recent e-commerce gains as a share of overall retail sales are here to stay. Living up to the promise of delivery within hours of an order being placed requires goods to be shipped from within the urban core, adding to seemingly insatiable demand for last-mile distribution, third-party logistics and fulfillment centers in and around New York City’s outer boroughs.

The lack of land parcels that are large enough to accommodate the needs of modern delivery and logistics users has ushered the unprecedented development of multi-story warehouse facilities with high ceilings, wide column spacing and massive truck ramps able to accommodate container truck delivery.

Most of the product in the city’s 6.2 million-square-foot industrial development pipeline is projected to be complete within the next three years and caters directly to the demand for last-mile delivery and distribution space.

Another significant demand driver comes from movie and TV studios, an industry that recently received a finacial windfall in the form of a $420 million annual tax credit from New York state.

While e-commerce and the film industry are the primary growth engines behind the demand for larger facilities, buildings of approximately 30,000 square feet or less have seen additional price pressure, fetching premiums as high as 20 percent above their larger counterparts on a per-square-foot basis.

This is due to strong demand from both well-capitalized private investors and from owner-users benefitting from increasingly available SBA financing that allows businesses to receive acquisition loans with loan-to-value ratios as high as 90 percent. Ghost kitchens — facilities set up for the preparation of delivery-only meals — have also emerged as major players within this size category.

As of mid-May 2021, the city’s industrial sales volume for outright and partial interest sales transactions stood at approximately $500 million, keeping this year’s deal activity on track to match or potentially surpass the numbers from previous years.

We are seeing pent-up demand from private and institutional capital aggressively seeking both value-add and stabilized industrial investments throughout New York City and its environs. Many buyers that dropped out of the market entirely in early 2020 because of the uncertainty during the height of the pandemic are now re-engaging and are eager to make up for lost time.

Our team of investment sales brokers has seen growing levels of activity around our industrial inventory, with some listings generating bidding wars and new offers coming in at as much as 10 to 20 percent above lockdown levels.

The market’s sentiment, as gauged by our conversations with local investors, is shifting away from a fear of loss toward a fear of missing out. As a result, we expect to see robust deal velocity over the coming months and a very strong second half to 2021.